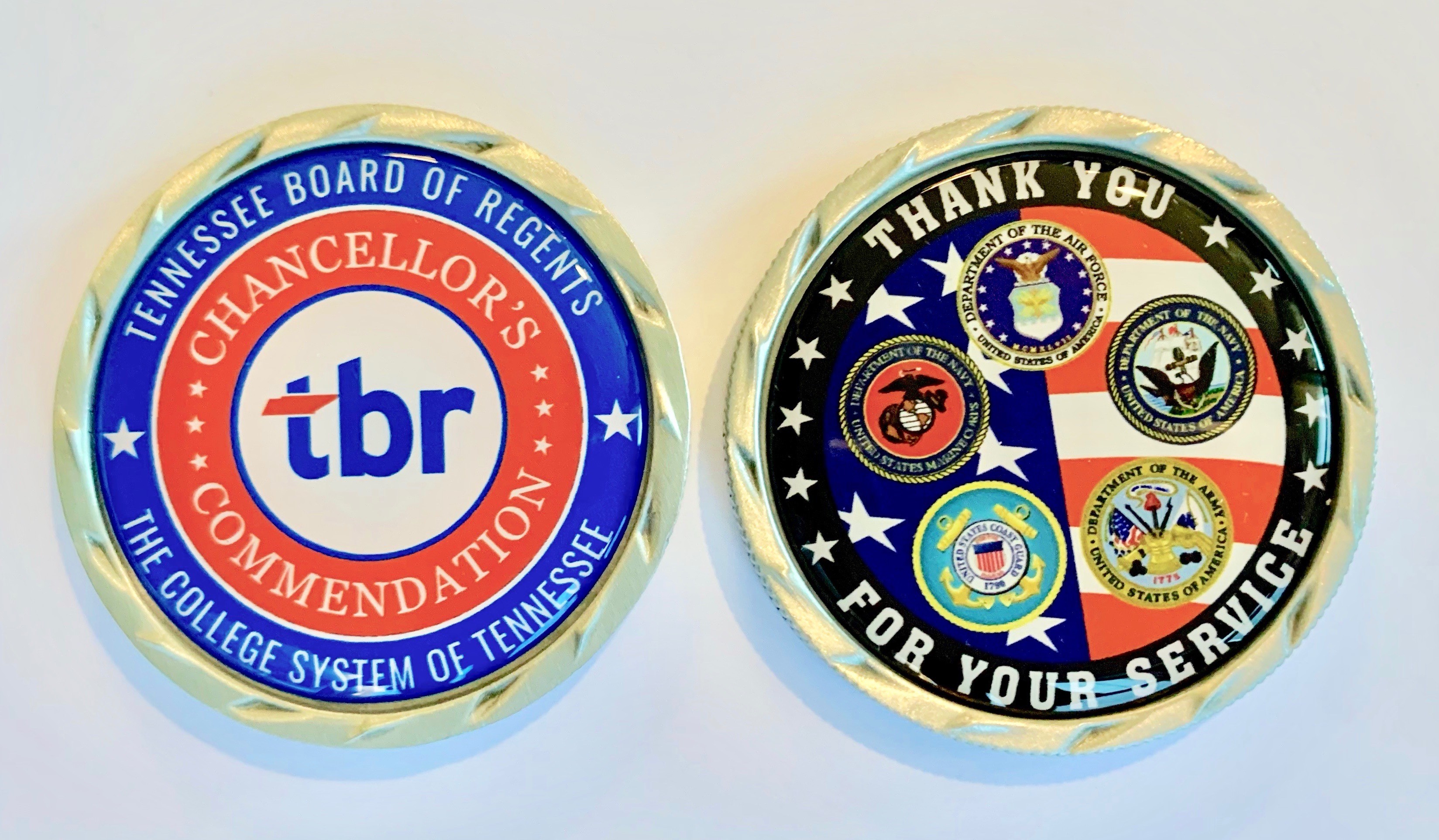 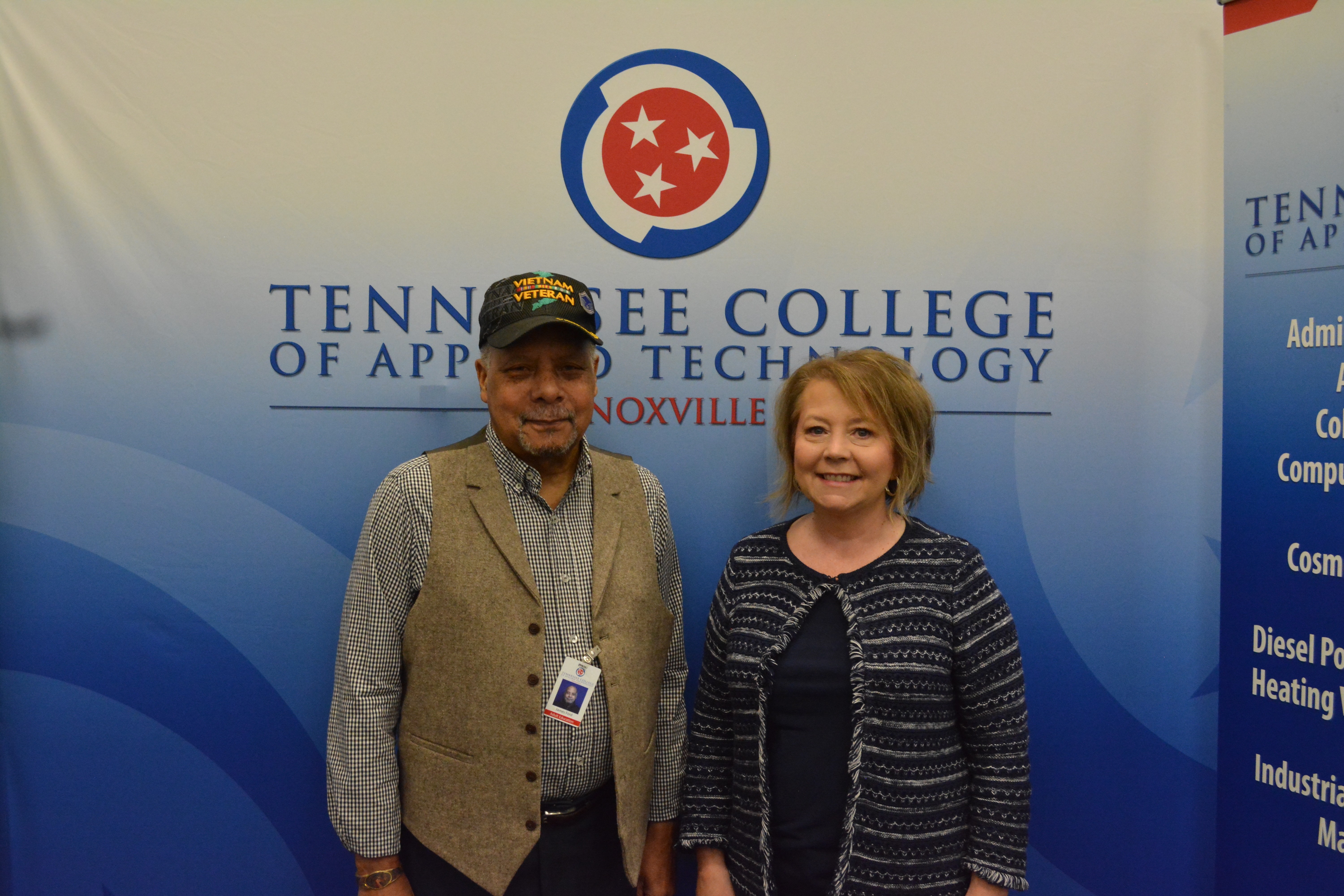 Top Stories of the Day

KNOXVILLE, TN (November 11, 2021) — Military veterans from community and technical colleges across Tennessee were honored this week as part of Veterans Day activities. As part of those activities, each college awarded one veteran with the Chancellor’s Commendation for Military Veterans.

Tennessee Board of Regents (TBR) Chancellor Flora W. Tydings established the commendation last year to honor the service, bravery and sacrifices of veterans in campus communities. The commendation comes in the form of a specially designed challenge coin, which is traditionally used by all branches of the military to signify special achievement, excellence, hard work, unit pride, respect and esprit de corps.

This year’s recognition by the Tennessee College of Applied Technology (TCAT) Knoxville went to Jim Ford, a United States Air Force veteran of 23 years who serves on the East Tennessee Adult Education team as the program coordinator for Integrated English Language Civics Education (IELCE). In that role, Ford assists students who speak English as their second language with obtaining their high school equivalence diploma.

Ford was nominated by TCAT Knoxville President Kelli Chaney, who cited his leadership, teamwork, and dedication as defining reasons for him to receive the Chancellor’s commendation.
“It is clear to me why Jim is deserving of this honor with how he exhibits leadership, teamwork, and dedication to East Tennessee and our entire country,” Chaney said. “He continues to demonstrate an unparalleled commitment to creating opportunities for his students. Valued qualities such as those make us feel fortunate to have him as part of our TCAT family.”
Ford held many positions during his 23 years of service, including ascending the ranks as a security policeman from 1965-69. From 1967-68, he was on duty in Vietnam. By the conclusion of Ford’s service, he became a sergeant.

In 1983, Ford re-enlisted and became a senior master sergeant by the time his service came to a close in 2001. He served multiple areas through out that time, including command and control specialist, recruiter, quality improvement specialist, and academic instructor for the Air National Guard.

There were 37 total recipients of the Chancellor’s Commendation this year, all of which were nominated by their school’s president. This year’s recipients consist of 14 Soldiers, nine Sailors, seven Airmen, six Marines, and one Coast Guardsman.

“These 37 men and women represent the spirit and values of our colleges – student success, academic excellence, courage in adversity, and service to campus and community – and the highest ideals of military service,” said Chancellor Tydings.
Tydings added, “All military personnel take an oath in which they solemnly swear or affirm to support and defend the Constitution of the United States against all enemies. That defense of our great nation requires tremendous sacrifice. Our college communities are strengthened by the presence, “Our college is honored to serve the veterans who have served our country so well,” said TCAT Dickson President Arrita Summers. “This designation is representative of our ongoing efforts to support and equip veterans in every way that we can.”

To earn VETS Campus certification, an institution must prioritize outreach to veterans and successfully deliver services necessary to create a supportive environment where student veterans can prosper while pursuing their education. The Tennessee Higher Education Commission has certified 28colleges and universities as VETS Campuses. Certification is reviewed annually.
“The Tennessee Board of Regents is fully committed to the academic success of our veterans. The faculty, professional staff and senior leaders on all campuses and at the system office are dedicated to serving all veterans and military personnel, who bring a wealth of training and experience to our institutions,” said Dr. Robert M. Denn, associate vice chancellor for academic affairs and veterans service officer at TBR.
Information on resources for veterans interested in pursuing their education is available here.
Information on financial assistance for veterans is available
here.

Recipients of the 2021 Chancellor’s Commendation for Military Service, their association with the college, and their military branch of service are: